Belmont United Methodist Church is a community of Christ-followers growing in love of God and neighbor. As one particular expression of life together, Belmont is committed to expanding ministries of reconciliation and inclusion to all of God’s children. In 2013, Belmont adopted this Welcoming Statement to express this ministry of hospitality:

We believe every person is of sacred worth and created in God’s image. We commit to Jesus’ example of inclusive love, care, and intentional hospitality with persons of every race, ethnicity, age, sexual orientation, gender identity, marital status, faith story, physical or mental ability, economic status, or political perspective. We respect our diversity of opinion and expressions of faith. Therefore, as God loves us, so let us love and serve in the name of Christ.

To live out this Welcoming Statement, Belmonters for Inclusion focuses on two ministries:

Ministry to the Local LGBT Community

Sponsoring a booth and welcoming people at the annual Nashville Pride Festival.
Participating in the local Dining Out for Life evening.
Participating in Nashville’s AIDS Walk.
Hosting an annual Prom for LGBTQ teenagers who may feel excluded from their own high school Prom.
Hosting college and job fairs that target the LGBTQ community.
Coordinating events and programs with Out Central.
Offering the This I Know bible study for those interested in a constructive, in-depth conversation on Christianity and homosexuality.
Hosting film screenings and panel discussions. 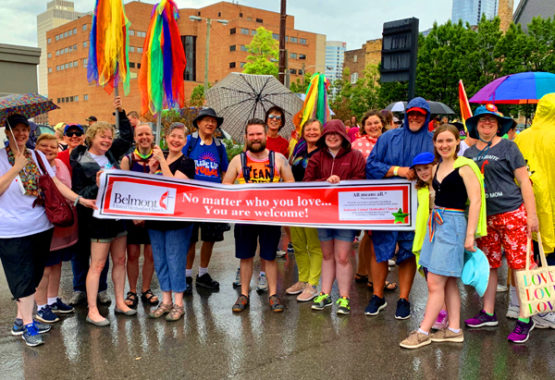 Many thanks to Belmonters who braved the storms to walk in the Pride parade and work at Belmont UMC’s booth the weekend of June 22-23, 2019. Photo by Jacob Vaughn

In 2016, Belmont submitted eight petitions to the UMC General Conference to eliminate those portions of the Book of Discipline that have discriminatory language toward LGBT persons. These petitions to remove the Disciplinary statement that homosexuality is “incompatible with Christian teaching,” to allow LGBT persons to serve a clergy, to permit UMC clergy and churches to participate in same sex marriages were signed by over 1600 UM churches and individuals from 45 states. Belmont has also provided leadership to the Nashville Area Reconciling Ministry group and other Tennessee Annual Conference events. Belmonters for Inclusion: A ministry team of laity and clergy in the Belmont UMC community who plan and implement local church and community programs and events focused on strengthening our welcome to and inclusion of all people, especially those who are gay, lesbian, bisexual, transgender, and questioning, and to their families and friends. Our Stories is a collection of personal stories and reflections from Belmonters about why all people, regardless of their sexual orientation, should be welcome at Belmont and other United Methodist churches. Download a pdf version of ourstories.

Belmont UMC featured in January 2014 Out and About Nashville magazine – The January 2014 issue of Out and About Nashville, Nashville’s leading magazine for the LGBT community, features an article about Belmont’s decision to adopt a welcoming statement that explicitly welcomes, among others, persons regardless of their sexual orientation or gender identity. The article, written by Belmont member Eric Patton, describes the church’s long conversation about adopting a welcoming statement and the strategic planning discernment process that led to adopting this statement in October. Download the OutandAboutarticle article.