Check this webpage often for justice and service activity opportunities available at and beyond Belmont UMC. 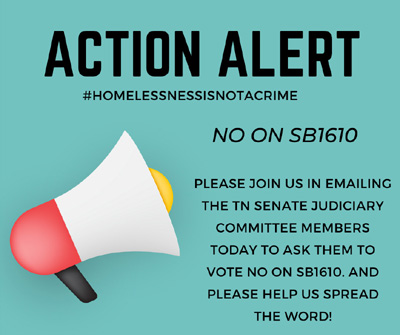 Please join us in emailing the TN Senate Judiciary Committee Members TODAY to ask them to vote NO on SB1610. And please help us spread the word! (Last year, the committee members voted like this: Gardenhire, Kyle, Lundberg, Robinson, Rose, and Stevens all voted NO; White voted YES; and Bell and Roberts were present but abstained.)

Last year, your committee voted against advancing SB1610 because of the unintended consequences it had for some of our most vulnerable Tennesseans. Thank you! I’m a concerned Tennessee resident and I’m writing to ask you to once again vote NO on advancing SB1610. The proposed bill is not only fiscally irresponsible, but it also further criminalizes people experiencing homelessness without addressing the root cause of homelessness - the lack of affordable housing. The bill also jeopardizes and criminalizes legitimate forms of employment, like selling street papers through The Contributor.

Across our state, more and more Tennesseans are being forced into homelessness as wages remain stagnant, the cost of living continues to rise, evictions are now unrestricted, and state and local policies prioritize development that does not include affordable housing. While we know homelessness is a complex issue, we also know that policing does not end homelessness -- only housing ends homelessness.

Additionally, SB1610 would create a class C misdemeanor offense, punishable by a $50 fine and community service work, for solicitation from a roadway, shoulder, berm, or right-of-way of a controlled-access highway or the entrance or exit ramp of such highway. SB1610 would also prohibit camping on the shoulder, berm, or right-of-way of a state or interstate highway; or under a bridge or overpass, or within an underpass, of a state or interstate highway. An unintended consequence of this bill is that people experiencing homelessness who are trying to better their lives through reputable nonprofits like The Contributor could be criminalized for selling their papers. One of the fastest growing subgroups of people experiencing homelessness are those who are working. This bill sends the wrong message to people who are trying to get back on their feet and those who are helping them.

If passed, SB1610 will criminalize Tennesseans experiencing homelessness for merely existing in public spaces. In doing so, SB1610 encroaches on protections granted by the 9th Circuit Court in Martin vs. Boise by criminalizing involuntary homelessness. Criminalizing homelessness is not only unjust, but also adds additional barriers that prevent people from obtaining housing and jobs and disproportionately burdens already marginalized communities.

It is important to acknowledge that our state does not have enough accessible shelter beds for everyone experiencing homelessness. Even when shelters do exist, many can’t meet the criteria for entry so they are left with no other option but to sleep on public property while they work toward housing. Single fathers with minor children, couples, intergenerational families (like a mother and adult son), people with high medical needs, and people with pets have limited to no shelter options they can access across the state. Again, people are not always choosing to stay outdoors over a shelter - there often truly is not a shelter door that they can walk into.

As Tennessee’s affordable housing crisis deepens, it is misleading and dishonest to defend SB1610 with the argument that our unhoused neighbors have alternative housing options and are choosing to live under bridges or outside instead. According to the National Low Income Housing Coalition, 25% of Tennessee renters are designated as extremely low income (ELI). To be considered ELI, a household must be below 30% of their area median income (AMI). In Tennessee, the maximum a four-person ELI household could make annually is $25,750. Yet, according to HUD, the annual income needed to afford the fair market rent for a two-bedroom rental home in Tennessee is $36,587—far beyond reach for 25% of Tennessee renters making $25,750. In other words, nearly one third of all Tennessee renters qualify as Extremely Low Income, and there is currently a shortage of at least 116,172 affordable homes for this income group alone across the state.

According to federal studies, an individual’s chronic homelessness can cost the public anywhere between $30,000 and $50,000 a year - these costs are mainly attributed to use of emergency services and unnecessary and expensive interactions with our legal system. A housing-first approach, rather than criminalization, would be both more fiscally responsible for the state of Tennessee and better for our communities by reducing the strain the experience of homelessness places on local hospitals, court rooms, and prisons.

For the above reasons, I ask you to vote NO on SB1610. Instead of creating legislation that will make our unhoused friends less visible to the general public, I ask you, an elected official, to advocate for the development of affordable housing and investment in social services that we know make our communities healthier and safer for everyone. Opposing this bill would also be more fiscally responsible for the state by avoiding the public costs associated with repeatedly citing and arresting people who are experiencing homelessness. Likewise, opposing this bill will save the state money by preventing people from being trapped in homelessness - unable to secure housing due to charges on their record that this bill would promote.

When you vote on this bill, please consider the thousands of unhoused Tennesseans who are also your deserving constituents. This bill will only make it more difficult for them to obtain housing or employment. No one should be without a home, and no one should be criminalized for merely trying to survive. Thank you for your consideration and support.

Sincerely,
(Your name)
(Your address) 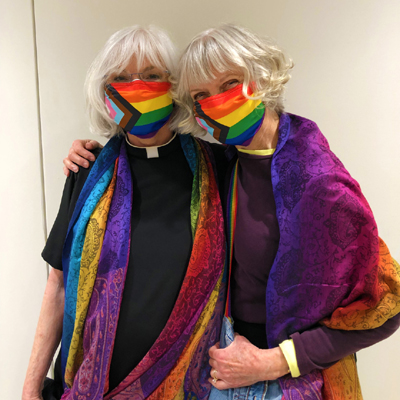 On February 9, Belmonters Pam Hawkins and Judy Isenhour were present at the Tennessee General Assembly to protest a bill that would cause harm to LGBTQIA+ Tennesseans of all ages. Fortunately, HB578 (the House of Representatives bill) did not get presented for a vote but it will be coming back along with others like it. Pam and Judy said that taking a little time to stand and speak up for many who are not treated equally is so important and worth it. Make plans to join them next time! 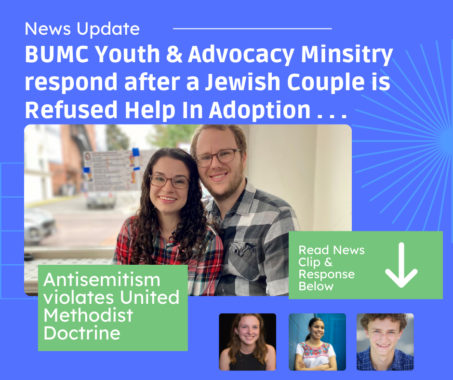 In response the article below, Emma Anne Stephens, Tate Keuler, and Natalia Del Pino authored an Antisemitism violates United Methodist Doctrine letter, which will be published in the Tennessean in Mid-February.