In the 100 year history of Belmont United Methodist Church, the pipe organ has been the primary instrument for leading worship music. The appropriately named king of instruments, is undoubtedly the superior instrument for leading and accompanying singing as well as inspiring a worshipful atmosphere for all worship settings through solo musical offerings. Belmont’s first chapel, built in 1910, housed a small pump organ that was brought to Belmont from its sister church of Watkins Grove. This instrument was used, sometimes along with piano, for the duration of that particular worship space until the second sanctuary was completed in 1916. At that time, an organ “was purchased from the old Parthenon Theater and was a combination organ and piano. In addition, records could be played on it. This organ was used for the first time at the opening service in the new building (April 2, 1916) with Miss Frances Adams (Mrs. Carl Francis) at the console.” The Parthenon organ was sold to Ward-Belmont College for use as a practice instrument when Belmont Methodist commissioned the current sanctuary in 1929. At this time a new Aeolian-Votey organ, one of the best of the time, was purchased and installed. This organ had 3 manuals of 30 stops controlling 27 ranks (sets). With the need for electronic updates and tonal adjustments to the organ, 22 ranks of pipes from the Aeolian-Votey instrument were refurbished and revoiced as well as additional pipes added to create a new instrument built by Rueter Organ Co. of Lawrence, Kansas. It was completed just in time for Christmas in 1960 and to mark the 50th anniversary of the church. The 3-manual console controlled 3 divisions of pipes located in the front of the church as well as an antiphonal division located on the back corner of the balcony. This instrument included 46 ranks, 2687 pipes, 57 stops. Our current instrument, undoubtedly the most magnificent instrument to adorn the sanctuary, was installed in 1988 after a five year effort of planning and fundraising. The organ, built by the M. P. Möller company of Hagerstown, Maryland, includes some of the pipes from the Aeolian-Votey and Rueter instruments. Like the previous Rueter instrument many new pipes were added to create an entirely new instrument. Including several stops that were added after the initial installation, the Möller organ contains 49 stops, 70 ranks totaling 4,078 pipes. Renovations and revisions to the organ are currently in progress by Daniel L. Angerstein Organ Works. These renovations include an upgraded electronic system, new piston and stop action, keyboard refurbishment, new shades for the swell and postive divisions as well as a complete tonal finishing and revoicing.

Hear the organ by clicking on one of the links below 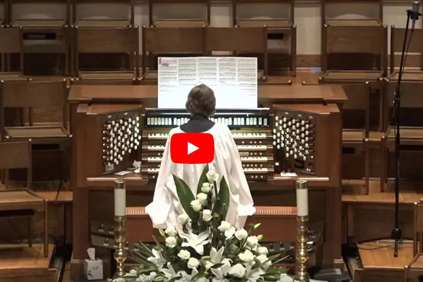 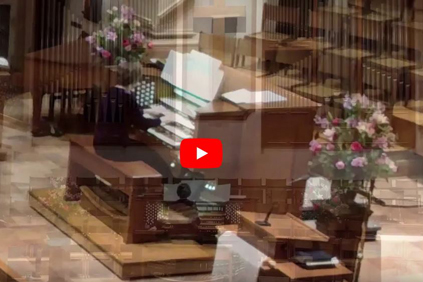